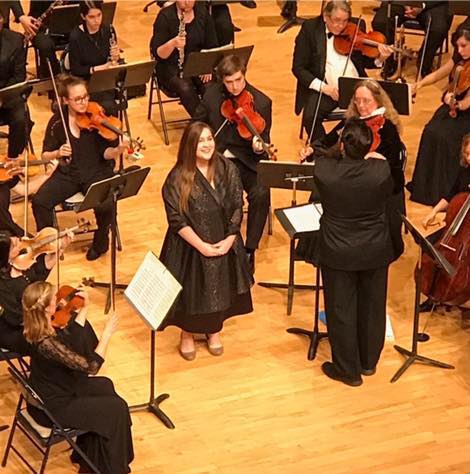 Shelby Maberry has been a voice student for over ten years and a voice teacher for two. She started her classical voice training at Texas A&M University Corpus Christi when she was thirteen years old. Upon moving from Texas to New York in 2009, her education would continue through Infinity Visual and Performing Arts and Marjorie Switala over the next four years. From the ages of fourteen to eighteen, Shelby auditioned for and qualified for NYSSMA Area All-State Mixed Chorus, NYSSMA All-State Mixed and Women’s Chorus, and NAfME All-Eastern Choir. She participated in every Southwestern High School musical, earning the roles of Bonnie in Cole Porter’s Anything Goes and Rosie Alvarez in Bye Bye Birdie. Additionally, she sang with (and continues to sing with!) Chautauqua Chamber Singers. Upon graduating from Southwestern High School, she attended Mercyhurst University to major in opera where she graduated with a Bachelor of Music Voice Performance – Opera, secondary in piano.

While attending Mercyhurst, Shelby sang solos in Rutter’s Requiem and Beethoven’s Mass in C with the Mercyhurst Choir. She also sang the roles of Puccini’s Madama Butterfly (cover), Pamina in Mozart’s the Magic Flute, and Antonia in Offenbach’s The Tales of Hoffmann. While in school, Shelby started teaching voice lessons at a studio in Erie and found her new passion. As fate would have it, Shelby returned to Jamestown and decided to continue her teaching career in the very school she started with in New York State: Infinity Visual and Performing Arts. Shelby is proficient in piano, English, German, French, and Italian diction, sight-singing, music theory, and vocal technique for multiple styles of singing. Additionally, she has extensive knowledge of the classical music industry, role study, and vocal classifications and fachs. When she’s not teaching, you can find Shelby fetching a tea at Labyrinth Press Co., attending local music, or doing yoga!